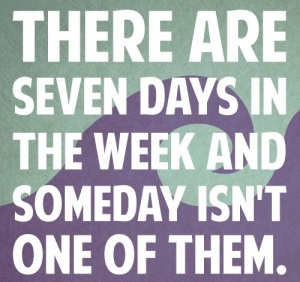 How many times have you said to yourself, “I’ll do that, someday” or when asked about a goal or an expressed aspiration, you responded, “Someday.”

Someday isn’t real, it doesn’t exist, it is simply a figment of our imagination. A buffer to buy some time. But here’s the thing, time is a valuable thing to waste, especially on something that doesn’t even exist.

I was reminded of the precious value of time as one of the most memorable, likable actors to ever grace the big screen passed away this past weekend. Michael Clarke Duncan suffered a heart attack in July and never fully recovered from the damage, bringing an end to his life on Earth at the tender age of 54. While his passing reminds us to take a moment to realize the fleeting passage of time and count our blessings for another day, there’s another powerful chapter that we can learn from in Michael Clarke Duncan’s story.

While we may remember him as John Coffey in the movie The Green Mile or his role as Bear in Armageddon, Duncan had what many would call a “late start” into the acting business. Growing up in a single-parent home in Chicago, he was forced to forfeit his acting dreams to work and support his family when his mother became ill. While his dreams were laced with the bright lights of Hollywood, the reality was much different as he toiled day in and day out, with a sweat torched brow and aching back, he dug ditches for a living.

At the age of 38, after digging ditches, working as a club bouncer and security guard, Duncan decided it was time to take the steps to achieving his dreams. It didn’t matter that 38 years had come and gone and that the business of Hollywood said it was “too late.” To him, that was a lie. It wasn’t too late for him and its not too late for you. While our circumstances are probably much different than that of Michael Clarke Duncan, we can indeed learn from his courage to keep dreaming and the perseverance to see it through.

So, no matter your age, vocation, location or education, if you are reading this blog, there is still time to go out there and capture the dreams that fill your heart!

And don’t wait for “someday” to get started, for it will never find you.

One thought on “Someday Does Not Exist”

Be a LYS Character

Join the Living Your Story (LYS) community as we all join forces to create a lasting story with our lives - one that inspires and leads others to greatness long after our journey on Earth is done.